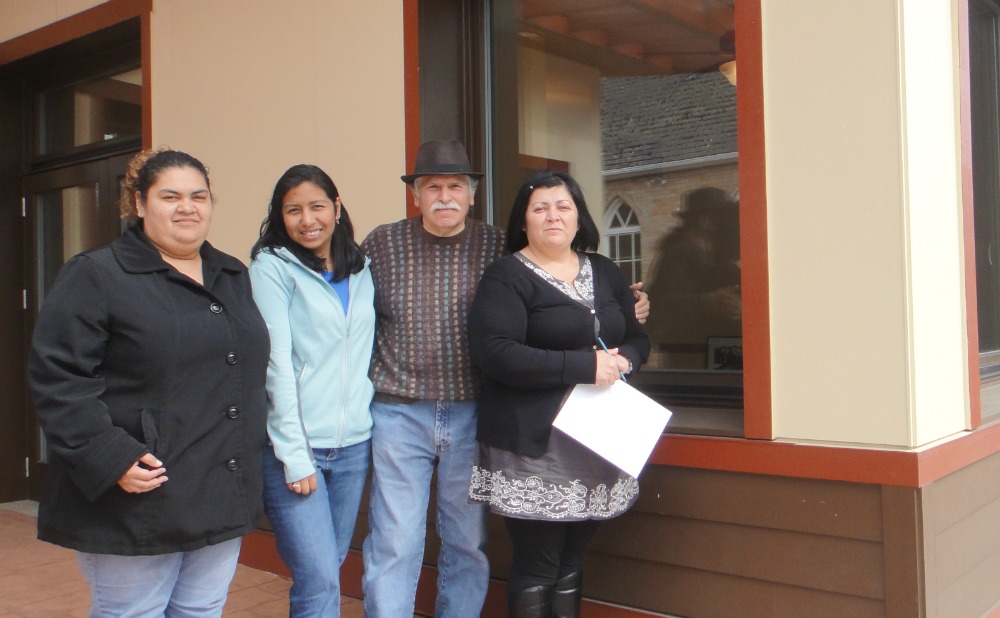 Back in the fall of 2011, leaders of the CAPACES Leadership Institute met with Woodburn city council officials for approval to paint a mural on the exterior of their building. Reluctance from the city to pass an ordinance allowing for publicly displayed murals led to a campaign that has since been known as the CLI Mural Civic Engagement Campaign.

On the heels of an historic vote by the city to allow for the CLI to paint a mural that will stand as a monumental landmark, we’ve interviewed mural organizer Dalila Ortiz for her perspective on the campaign she has helped lead:

Q: Tell us about the Civic Mural Civic Engagement Campaign and the Mural Project?

A: The mural campaign was an opportunity not just to paint, but to bring the community to paint a farmworker mural that represents the community. The goals of the campaign were:

1) Paint a mural that would reflect the contributions of the farmworker community,

2) Work with farmworker families to engage the Woodburn City Council to change its city ordinance,

3) Bring in a well-rounded muralist in Juanishi Orosco, who painted PCUN’s mural, to paint the CLI mural and mentor for young local artists,

4) Foster a community building activity that would bring together the Woodburn community and facilitate a dialogue about farmworker contributions.

Q: What phase is the CLI mural currently in?

A: We are awaiting a public hearing for Tuesday, June 26th. On that day, we hope to get the Woodburn Public Art Mural Committee, appointed by the city council, to approve our application and the mural design we have submitted.

Once passed, we hope to have our mural painting kick-off on July 13th, which coincides with the CLI’s second anniversary as an organization.

Q: The CLI faced many obstacles in passing a mural ordinance, what was the turning point?

A: After the city dismissed our desire to paint a mural, we went back to the community. I had many discussions with families, where we received a lot of input and feedback. The community began to take ownership of the mural and the idea that it could serve as a narrative of the contributions of farmworkers.

Q: Wow! Changing gears now, tell us about the design of the mural?

A: The design of the mural encompasses the elements of the surrounding community from the perspective of the farmworker. For example, the design incorporates the image of farmworkers picking berries and a woman holding tulips, a reflection of the existing industry in the mid-Willamette Valley. The mural also includes images from our past such as Japanese workers in the mid-Willamette valley pre-world war II and of the more recent image of Latinos voting in the 2012 election.

The mural also carries heavy symbols of education, emphasizing how important education is for the community, and tying the role of the Institute.

Q: Who will be involved in painting?

A: Juanishi Orosco will be the lead muralist, and will be accompanied by hand-picked painters to help lead the mural painting. Juanishi, as many may or may not know, helped paint the iconic PCUN mural displayed in their Riseberg hall. We will also have the community at-large to help paint the mural. We’ll have farmworker families, youth, and other leaders coming in to help paint.

Q: How can people help?

A: People can help by contributing their time to come down to the leadership institute and help paint. Generally we’ll be painting between 10:00am and 7:00pm. Another way for folks to help is by making a donation, to help us fund the painting. We’ll come out with more information on both soon.

Q: What does the mural mean for the movement?

A: The mural is a landmark, it portray the history of Woodburn through the eyes of the farmworker. It will raise-consciousness for people driving by of a history not often told.

Q: Finally, What does the mural mean for the community, and the families who worked with you to change the mural ordinance?

A: It feels like we, Latinos and farmworkers, are finally being acknowledged. That we are not a “hidden” community and it brings pride to know that our contributions to the community are being recognized. This project means so much more than a painting on a wall.