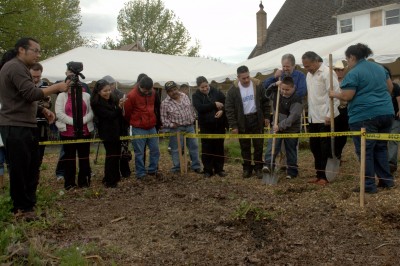 On Friday, July 13th and Saturday, July 14th, 2012, hundreds of community members and Institute supporters will gather to officially open and inaugurate the Institute’s permanent home at 356 Young Street in Woodburn.

Today, PCUN President Ramón Ramírez is sending a letter to U.S. Secretary of Labor Hilda Solís formally inviting her to be the keynote speaker for the Grand Opening.  Secretary Solís promised Ramón that she would attend and now we’ll work with her staff on scheduling.

We chose July 13th in part because it will be the first anniversary of the Institute’s incorporation as an independent non-profit organization.  We expect such a wide and rich array of participants for this historic occasion that, we decided, one day just won’t suffice.  In addition to the “celebration”, we plan to organize activities that engage and illustrate topics central to the Institute’s mission.

As we’ve mentioned in recent e-updates, the Institute’s first course sessions are already underway—next door at PCUN’s Risberg Hall.  We expect that, by July 2012, a full complement of courses will have been completed and new ones will be in development.

The mid-July weather in Oregon’s Willamette Valley is (usually) very conducive to an outdoor celebration and the activities we envision.  Earlier in the year, not so much.  That’s another compelling reason to hold the Grand Opening next summer.

So “save the date” and rest assured that we’ll be sending out ample details as the occasion draws nearer.