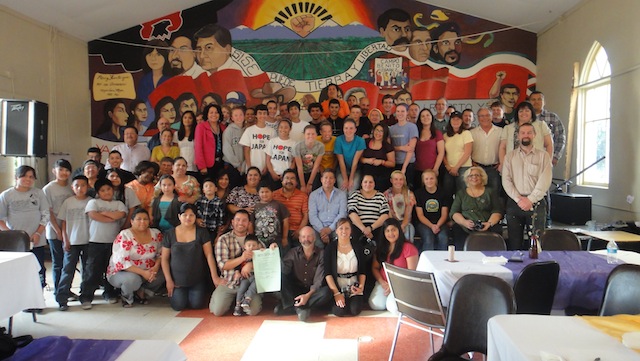 “Do we have the leadership it will take to sustain and advance our movement through its fourth decade and beyond?” Even as we press for immigration reform and make a difference every day in the lives of thousands of farmworkers and immigrants, that question is increasingly on our minds.

Our answer is “no…”and therefore, we’re formally launching the campaign to propel a quantum leap forward: fund, build and staff the “CAPACES Leadership Institute”. When the Institute opens in 2011, we’ll have the capacity to develop more deeply and methodically the political consciousness and the skills of the current and new waves of leaders.

The CAPACES Leadership Institute builds on the CAPACES project which we began in 2003, knitting together nine sister organizations that serve and organize the Mid-Willamette Valley Latino community and allies. The CAPACES process has forged stronger peer relationships among our combined sixty staff, fostered a sense of movement scale, and promoted shared values and expertise.

The Institute will have three full-time staff and many collaborators working one-on-one and in small groups on combating sexism and taking the “long view”, just two of many topics essential to making and defending fundamental social change.

We calculate that we’ll need about $670,000 to build the Institute’s home and operate the Institute through its first year. As of October 24, 2009, we have $230,000 in cash contributed or pledged and we hope to raise the rest by December 2010. We’ve set a goal to raise $150,000 from 50 donors who each contribute $1,000 or more. We expect volunteers will provide labor worth about $250,000. To recruit and organize construction teams, we’ll draw on our volunteer mobilization successes which took Radio Movimiento (PCUN’s low power FM radio station)from the drawing board to the mixing board in under five months in 2006.

Creating the Institute continues the PCUN tradition of movement building, even in bad times. As PCUN approaches its 25th anniversary next spring, we recall that the organizing to form PCUN started during the depths of the Reagan Recession, amidst intense immigration raids.

On May 2, 1980, at the dawn of our presence on Woodburn’s Young Street, a few dozen folks gathered to celebrate the opening of our movement’s first permanent home in a cramped wood-frame house. With generous support, we’ll be able to gather at that very spot, next to PCUN’s Risberg Hall, on October, 2011 to break ground for the CAPACES Leadership Institute building!